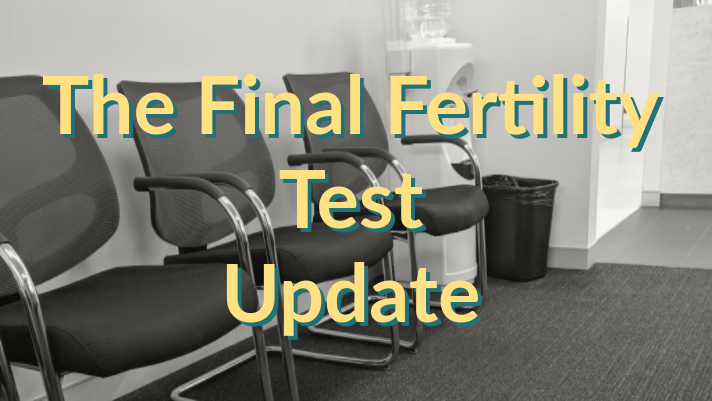 It’s now been a few weeks since my fertility test and I’ve had a few people reach out to me asking how it’s been going so I figured I’d write a quick update and let everyone know where we’re at with this. It’s been annoyingly more difficult than it should’ve been due to some complications which I’ll outline below. However the gist of it is we still don’t know.

Next week I will be undertaking my third fertility test which is extremely frustrating, and possibly a karmic joke since I entitled the initial post “The Final Fertility Test”. Joking aside this entire process has made me feel a combination of emasculated, stressed and incredibly angry with how the process has gone. For those of you who are unaware with the intricacies of male fertility testing I’ll give you a very brief overview of how it works here in Australia.

I had always pictured male fertility testing like they do in the movies or TV. You go to a clinic, head into a room, do the test and Bobs your uncle. In my experience here in Australia it’s very different and is a process that leaves a lot to be desired.

Firstly, the test is a take home test. You abstain from ejaculation for 3-5 days. On the day of the test you ejaculate into a specimen jar at home and race to the nearest pathology where it can be analysed. The key is getting to the lab within a 60 minute window for the test to be accurate, as sperm tend to die very quickly and this will affect the results.

There’s several problems that are inherent with this testing. The first is ensuring you have enough time to get to a lab that can analyse it, allowing for traffic and any other eventualities. I live 30 minutes away from where I undertook 2 of the tests.

Secondly and suprisingly, the lab might not test it immediately, I’ll touch on this infuriating point later.

The final two factors are almost one and the same. Being told your sperm count might be the issue is an incredibly hard thing to digest. For me it strikes a sore point and as much as I don’t want to admit it it feels like I’m less of a man than I should be. I know this is directly related to false assumptions of masculinity etc. However, the feeling is still there. Now with all this stress going on, knowing that you have a low sperm count; and as soon as you ejaculate you have to hope and pray you can get to the lab in time; then the lab tests it in time; how is it a good environment to be turned on enough to produce a viable sperm sample?

So with that out of the way, lets start with the first “final” test results.

The first test seemed to go fine initially. I abstained for 3 days, however the results were inconclusive. Basically, with all the stress involved I was unable to provide enough of a sample for all of the tests to be carried out. Yet, there were glimmers of hope. The count was higher than my previous test and the motility had improved. With that said though, they were not near where they needed to be which might have been due to the sample itself.

The second test is the sticking point for me and a source of my anger related to this whole fiasco.  I abstained for 5 days instead of of 3 previously. We got to the lab within 30 minutes meaning they still had 30 minutes to complete the test. Instead they made me wait 25 minutes to the point where I had to remind them that the sample is time sensitive. They finally saw me just to confirm my details. I leave and hope for the best.

We received the results back yesterday and I’m told they’re significantly worse than the first one. I find out the lab took an additional 30 minutes on top of the time they made me wait to test my sample. So instead of being 60 minutes they took 90 minutes. By that stage most of the sperm had died or deteriorated.

So I need to do the test again. We’ve opted to go with another lab for the testing. Hopefully we will have a much better experience.