Anxiety Crossroads – Where to from here? 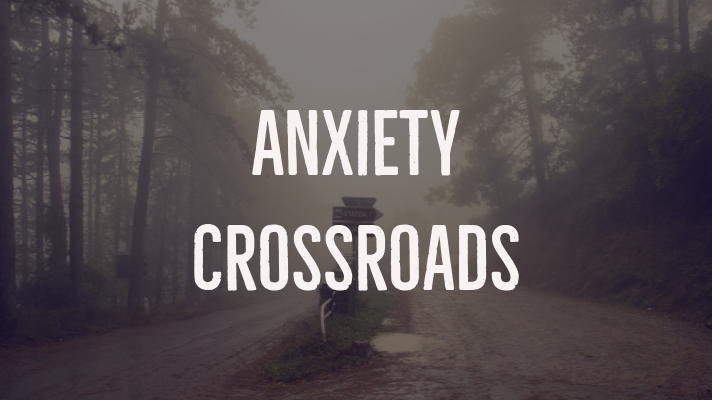 Anxiety Crossroads – Where to from here?

Caution: This article talks about mental health and suicide. If you are struggling with your own thoughts or mental health please call LifeLine on 13 11 14.

When I started documenting my journey, I wanted to be as honest as I could possibly be. This means not only sharing the victories but also the defeats. I’m writing this not to garner any sympathy, but instead I want it to be an insight to those who don’t understand what living with anxiety feels like; and to be an outlet of understanding and solidarity to those who suffer daily with the same struggles.

The truth is sometimes it’s extremely hard to find the motivation to keep going. These last few weeks have been a nightmare with intense anxiety everyday, so much so it’s been hard to focus enough on getting to the end of the day. I feel that I’m at breaking point with my anxiety. I hate giving it this satisfaction, but it’s ruining my life. The more I push forward to accomplish things in my life, the further anxiety digs in its claws. The worst part of it is knowing that there’s no sure way to fix. I’m sick of having to live with it daily and tired from the its emotional roller coaster. Every day it feels like I am dealing with the most intense feelings of fear I’ve ever encountered. Every night wishing sunrise would wash away the previous day only for the next day to be the same nightmare. And it’s driving me towards some very dark places.

Currently I’m looking toward the horizon of what life has planned for me and there’s only one thing I can see and it’s a struggle to know that anxiety will be a constant. The only thing I know for certain is I no longer want it to be my companion, and I have tried everything in my power to rid myself of it. I workout as much as I can, I abstain as best as I possibly can from stimulants such as caffeine and sugar. And still it rears its head at the worst possible times. Sometimes it feels like I’m not compatible with how the world or life in general operates, I see people making progress in their lives in meaningful ways while I struggle with the simplest of tasks that come easy to others.

On top of this I’ve gotten so used to hiding my symptoms that I’ve become the world’s greatest pretender. Before I met my wife I’d never told anyone that I suffered from anxiety. I’d been so used to having an exterior where I hardly smiled and dressed in black as a way to hide how I really felt. It was a way to shield myself from my own weaknesses so I wouldn’t become a target or face the judgement of others. If you were to peel back the layers I was just a fearful person trying to push people away so anxiety would leave me alone. Trying to deal with my past the best way I could… by never admitting it or facing it.

This makes talking about my anxiety so much harder, because I’ve been so used to putting up that exterior that it comes as a surprise to some that I suffer from it so badly. I suffer from it daily, some days it’s manageable while other days it feels like an inescapable hell where your own thoughts are your own worst enemy. Imagine being beaten down mentally, with someone yelling the most hurtful and demeaning things – that is anxiety. The constant internal critic that devalues your own existence.

What makes it worse is trying to explain how anxiety makes me feel. Especially to those who don’t understand or who have never suffered from it. How do you describe something that you can’t see that fills you with so much dread and self doubt that you become a weak husk of your former self and you’ve considered ending your own life just to make it stop? Let alone telling your loved ones that your anxiety is making you contemplate your very existence.

With that said, I know deep down that it’s getting too far out of hand. The more I’ve tried to hide it the more unmanageable it became. Recently my anxiety has been so intense it doesn’t matter how much I exercise or how clean my diet was it was there constantly and needed to be addressed. It felt like I was admitting failure, like I was weak and all the work I had done to improve myself over the last 18 months didn’t matter. I’ve tried everything in my power to overcome it but it seems to always end back here.

I know I wasn’t admitting failure. I’m just my own harshest critic. However, I’d built up the fact in my own mind that I’d beaten my depression and was happy that I didn’t need medication. The thing is though, my anxiety has never really been treated. Sure, exercise and diet has played a role in alleviating it but for most of my adult life it has gone untreated besides therapy.

And before you say anything, I know. Asking for help or seeking treatment isn’t a sign of weakness. In my case it comes from fear of being judged and made to feel different. To be honest, asking for help is a sign of strength, it shows your willingness to overcome adversity and not succumb to it. Sometimes it just takes that initial bravery of pushing on with the first step to get help.

As of last Thursday I’m on a new medication to regulate my anxiety. I’m currently working through the initial side effects and hoping that this puts a temporary end to the increasing torment I’ve been facing lately. Time will tell.

If things are troubling you, be it personal issues, health issues or mental health issues, try to resolve them in the healthiest way possible as soon as you can, the longer you leave it the worse it becomes.