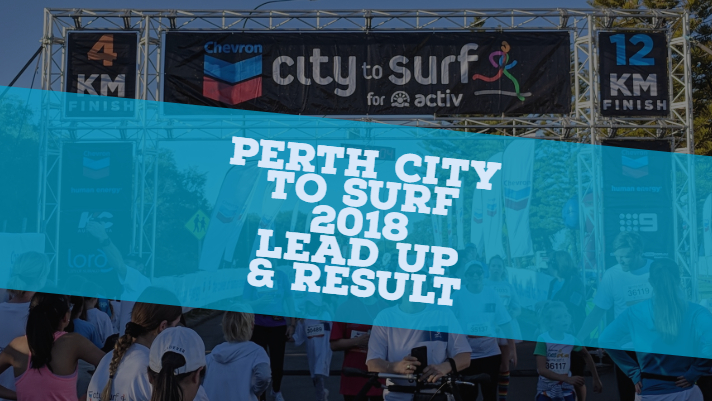 Sunday the 26th of October 2018 I ran my first City to Surf, and my second ever fun run (Parkruns excluded). I had run the HBF Run For A Reason earlier this year, however I had read that the City to Surf is a much more challenging run due to the hills throughout the course.

Leading up to the event I had been interviewed by City to Surf regarding my weight loss, mental health and my new found love of running. You can read the interview here. In the interview I had stated that I wanted to complete the City to Surf 4km course in under 40mins. Normally I finish weekly 5km Parkruns under that time, but given the added challenge of the hills I thought it would extend my time, even with the shorter distance.

The week of the City to Surf I had been struck down with a virus that left me sleeping most days with muscle soreness and unable to exercise. Doing everyday tasks would make me feel exhausted. The thought had crossed my mind that I might not be able to compete in the event. Adding to this on the Friday I pulled a muscle in my back getting out of bed. Things were starting to look grim.

Saturday I was scheduled to volunteer for Parkrun as a tail walker, you do the course but you’re the last person. I took this as an opportunity to see if I felt ok. A 5km walk would be a good test and at worst I could just walk the City to Surf if needed.

I felt ok during the, my back gave me a little pain but nothing that I couldn’t manage. I made the decision that I would run the City to Surf and still aim for my sub 40 minute goal.

I had trouble sleeping the night before the race from excitement and having to get up at 5am was tough. However, I felt ok. There was a little pain but nothing major.

During the run I felt good, the hills were always going to be tough but they weren’t as tough as I expected. The 4km run was over before I knew it. I was in the 2nd running wave so I didn’t pay attention to the time at the finish line as it was going to be a couple of minutes out.

I pulled out my phone at the end of the race and to my surprise I had run it in under 30 minutes. Managing to knock off 10 minutes from my goal.

With this result it’s given me the courage to push my running further. Currently I can run 5.2km straight. This is something that I wouldn’t have imagined. Even more surprisingly it’s getting easier and that distance doesn’t seem as much of a challenge.

I’m now looking forward to testing a 10km run within the next week or so. So stay tuned…