The Stain of Homelessness – My Long Lasting Effects of Sleeping Rough 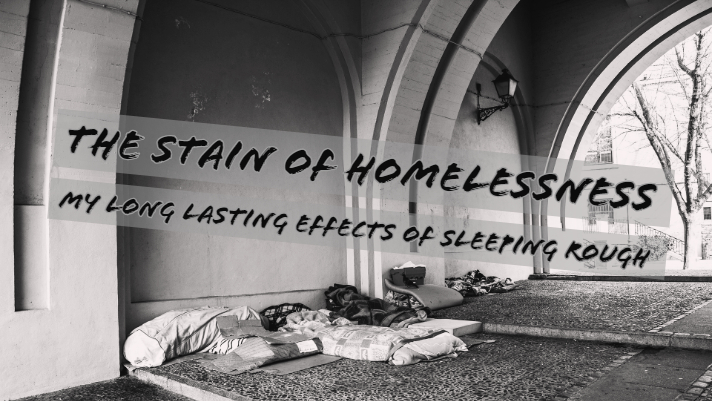 The Stain of Homelessness – My Long Lasting Effects of Sleeping Rough

For some, homelessness might seem like an extremely easy problem to solve. Get people off the street and badda bing badda boom the problem is magically solved. In actuality this couldn’t be further from the truth. If you’ve attended one of my talks you know I refer to the stain of homelessness as something that infects almost every aspect of your life long after you’re off the street. I thought it was about time that I wrote about the long lasting effects of my time on the street and how it still affects my daily life.

If you want to know how I ended up homeless and how I got off the streets you can read my series of posts here: Part 1; 2; 3.

Note: this is my story and the feelings, thoughts and experiences are my own and may not be representative of every person who has experienced homelessness.

I am extremely lucky to be in a position where I feel safe enough that I can share this. I am also extremely lucky to have found a way out of the position I found myself in. This is often not possible for many people. If you feel compelled to help the homeless after reading this please consider donating to one of these charities: Manna, St. Bartholomew’s, Croft Inc., Passages Resource Centre or search for homeless charities in your city.

My story of homelessness began in 1998 at the age of 16. I spent a total of approximately 12 months homeless with 7-8 months of those sleeping rough. This period of my life shaped me more than any other period and the experiences while being homeless have affected my relationships, friendships, mental health and physical health ever since.

Why do I call it a stain of homelessness? It’s not something you can remove from yourself. It permanently becomes part of your personality, no matter how much you try to run, hide, or deny it. It will be there for as long as you live and you can either deal with those issues as best as you can or let them haunt you for the rest of your life.

For myself it has taken a lot to confront these issues and it’s still a daily task to keep on top of them. It wasn’t until last year, 20 years after I left home, that I was even comfortable to even admit that I was homeless to those closest to me. Even my closest friends were unaware that I was ever homeless until I started doing my talks. Part of this was from fear of judgement, but another part was allowing a level of trust into my life that it will be ok to show some of the most vulnerable parts of my life to help others.

My friendships and relationships since being homeless changed drastically. I experienced a lot of detachment while being homeless, for me it was a way of survival. You disconnect emotions from the things you face. The violence, the friendships, the ignorance, the abuse. The best way to describe it is you feel like a shell of a human. You essentially become the equivalent of a human rat, the lowest rung of society and you’re reminded of it constantly. It in turn crushes your self esteem and your soul, so much so you detach yourself from your own life.

For me this manifests in how I not only view myself but how I also view my relationships and friendships. It’s something that I need to constantly keep in the back of my mind as I move forward with my life. If I feel attacked I will detach myself emotionally and blow up the friendship or relationship the best that I can as a way to protect myself.

As the years have gone by I can see how destructive this behaviour is and is something I work on daily.

I suffer from anxiety, mostly I’ve adapted and keep it well managed with a routine of exercise and medication. However the biggest hurdle for me is new experiences where I feel trapped or enslaved. Starting a new job is extremely hard for me for this reason. It feels like my life is on the line and I need to leave and be free. Imagine the feeling of being incarcerated for the first time, this is essentially how I feel every time I start something new.

I still relate the unfamiliar and fear of anything new to the times I had to adapt quickly to a very different world. It scares the absolute shit out of me and floods my brain with past experiences. Those feelings make me extremely emotional leading to vomiting and shaking. I’m that scared kid getting judged and attacked and being forced into predicament where I have absolutely no control.

I want you to think about how you slept last night. What time you went you got into bed and how you felt drifting off to sleep and what time you woke up. How annoyed you felt when your alarm went off. How it felt to go through your morning routine, brushing your teeth, washing yourself, getting yourself some breakfast.

Now imagine trying to find somewhere to sleep for the night, that’s not safe, cold, and drifting off to sleep with fear. Instead of an alarm you’re woken up by four people. Two people grabbing both of your arms and two people grabbing your legs. You’re completely powerless and all you can hear is laughing. You have no idea who they are or what they’re going to do. For them it’s fun, for you it’s a nightmare. If you’re lucky they’re just messing with you and might throw you into the ocean or river. At worst they’ll beat the shit out of you or try to kill you.

This was not a one off experience for me. This happened regularly. I’d been woken up with people beating, spitting, urinating on me, throwing rocks and bricks at me, trying to light me on fire and people threatening to kill me. The weekends were by far the worst. Especially when the pubs and clubs closed. And this is while was sleeping. This doesn’t include the people who would randomly punch me or try to fight me for fun during the day.

The memories of these experiences don’t evaporate when you get into accommodation. You see and experience the absolute worst in people. 20 years later I still wake up yelling in my sleep from the nightmares of this time. I don’t trust people walking behind me in public and still expect to be randomly punched. I hate being grabbed or touched without warning and absolutely hate the feeling of fear so much that it makes me lash out.

I’ve written about this before. This is still a long lasting struggle for me and is one of the key reasons behind me blowing up to 200kgs. I still relate the feelings of hunger to scrounging for food while I was homeless.

I was constantly hungry while I was homeless. Partly due to being a teenager and partly due to the scarcity of food. This destroyed my relationship with food and hunger. Hunger became something I feared and hated. Finding accommodation only fuelled this feeling and I would stop at nothing to get rid of feeling hunger.

Feeling hungry is something so natural and innocent however it still transports me to a very vulnerable time.

The Torment of a Wondering Mind & a Guilty Bed

Almost every night my mind will drift to my time on the street and how grateful I feel to be in a bed next to my wife. It’s both the best and worst feeling in the world. I feel safe, I know nothing will hurt me and it makes me feel equal parts calm and excited. Sometimes I can’t contain my joy and will let out an excited noise which always startles my wife. I no longer have to worry about that part of my life.

Then I start to think about others who are still experiencing it and how I am almost powerless to do anything about it. I start feeling guilty about my position. I then start getting anxious about how I managed to get off the street and what would have happened if I hadn’t reached out for help, or if the person I reached out to hadn’t helped.

To the Regret, the Grave & Beyond

One of the lasting impacts this time had on me was a friendship I had formed with a 14 year old girl. She was also homeless and had been homeless for 2 years when I met her. She had experienced extreme abuse at home which drove her to the street. Knowing what she went through on a daily basis while on the street forever killed a part of my soul.

There’s things that I’ve witnessed and experienced in this time that I know I will take to my own grave. There’s no way to put them into words. Things so horrific I sometimes wonder if they even happened. The worst of which happened to her.

Nonetheless her memory is with me and impacts me greatly. The reason why I’m mentioning this is I feel it’s unfair to not mention her impact in a post like this and I never want to dishonour her memory.

The Sensitivity of Insensitivity

I am going to be very direct with this. This part is for anyone who has ever talked negatively about the homeless. You never know who has experienced it or the long lasting effects that come along with it. I will always think a lot less of you if I witness you treat the homeless poorly in thought or in action.

Every time someone talks about the homeless in a negative way it makes me feel like a human rat all over again. You can comfort yourself with thoughts that people want to live that way or that they’re secret millionaires or whatever delusion you let yourself believe.

These thoughts and prejudices are at the end of every fist I ever felt hit my flesh, the fuel behind every insult I received and the epitaph of everyone who has ever lost their lives on the street.

Be thankful you’ve never had to experience such hardship, adversity, violence or disdain.

I talk and consult regularly about how my experiences have impacted me. You can find more information here.