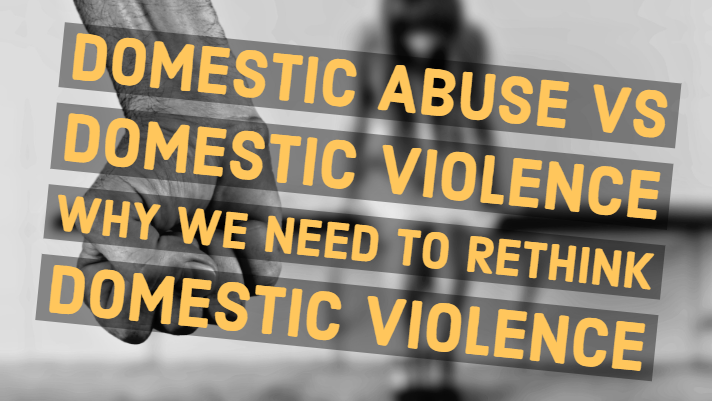 Over the next few weeks I will be opening up and writing about domestic abuse. I will be writing solely from my experiences and will outline both mental and physical abuse. I want to outline my experiences and what I have done to deal with my past demons and how I’m moving forward with my life. This journey has left me confronting, not only my past, but also the issues these have left me with.

These posts will be highly personal and are intended to help others who are in the same situation while educating others. Please be respectful to myself and others if you intend to comment or share these experiences.

An underlying issue I’ve found in confronting my abuse is the intersecting, yet different, principles between domestic abuse and domestic violence. Each contain a variable amount of assumptions that are antithetical to understanding issues that victims face.

Let’s use the term ‘domestic violence’ for instance. This is the phrase I’ve heard used most in my recovery, talks and meetings; and is the predominant language used in policy and literature. The very use of the word violence defines the action and in turn infers purely violent acts. Violence is especially vile, particularly in a domestic setting, but the term domestic violence leaves out much of the abuse victims face.

Let’s look at mental abuse for instance. In my opinion it’s as insidious, if not more so, than the use of violence. I’ll use an example I’ve outlined previously on my blog. On an almost daily basis my father would torment me verbally, stating that he could kill me at any time and no one would know. Following up with statements along the lines of reminding me he didn’t love me, or I was a mistake, stupid etc. These instances weren’t anything that would leave a physical mark, however the scar the left mentally has stayed with me to this day.

Of course one could say that threats of violence are part of ‘domestic violence’. Let’s say I agree with this, it still inherently omits the other horrid things he would say to me. Additionally, the use of the word violence omits acts of humiliation, belittlement, hyper-monitoring, control, guilt, destruction of personal possessions and other forms of mental or emotional abuse.

Government policy inevitably determines the conversation. It dictates funding, surrounding terminology and guiding philosophy towards domestic violence and domestic abuse. This causes an issue when approaching domestic abuse which is not in the realm of violence. Let’s look at very recent policy in Australia as an example.

From the Prime Minister of Australia on the 5th of March 2019: RECORD FUNDING TO REDUCE DOMESTIC VIOLENCE. At no point does it mention other forms of abuse apart from violence (with the exclusion of sexual abuse). Furthermore, the Department of Human Service’s ‘Family and domestic violence‘ services focuses primarily on violence. The Department of Social Services continues this trend with their focus on ‘Reducing Violence‘.

Of course, any policy towards acknowledging and working towards any elimination of abuse is welcome. The problem is this signals to the community that only domestic violence matters and the other forms of abuse do not exist. As such the continuing conversation in the media and between agencies inherently has their sights set on domestic violence and not on greater domestic abuse.

The Mental Health Flow On Effect

This flows onto other failures within policy with mental health. Not to mention the lack of funding in this area, the focus on violence signals to those with mental health issues that were caused by abuse that it’s not as bad or as insidious as violence. It trivialises your past. In my case, it wasn’t until I was well within my 30s that I started to confront domestic abuse as a root cause of my mental health problems because I was well in the realm of believing domestic violence was the only form of domestic abuse.

Starting to confront the violence I faced indeed helped me on my journey towards understanding my mental health issues. However, it still didn’t address other issues.

For instance, at the age of 3 I had many of my possession burnt and was forced to watch because I angered someone. This taught me to be submissive and complicit in the abuse I faced, it wasn’t violence so it doesn’t matter. I was forced to eat mouldy food, egg shells and raw potato, but it doesn’t matter because it’s not violent. This taught me to be accept my circumstances and to never criticise anyone.

Those two examples of abuse were equally damaging to me as the violence I faced, but because the conversation only focuses on violence I never confronted wider forms of abuse leaving my mental health to fester.

Now, there is no question that women are overwhelmingly the victims of domestic abuse. I don’t deny that in the slightest, however this is also where the problem lies. Let’s take, the Prime Minister of Australia for example in his approach towards domestic violence.

“Combating violence against women and children remains one of the Morrison Government’s top priorities, as part of its plan to keep Australians safe…to stop violence against women, we need to counter the culture of disrespect towards women. A culture of disrespect towards women is a precursor to violence, and anyone who doesn’t see that is kidding themselves”

For the most part he isn’t incorrect, a culture of disrespect towards women does exist, and we need to come up with solutions to this problem. However, this signals two things loud and clear. That women are the victims of violence and that men are the perpetrators. This inherently compounds domestic abuse.

This is the crux of the problem too. I can easily admit what my father has done to me but I still have problems with what women have done to me. It’s easier too because we can easily identify men as the perpetrators. Additionally, it took me more than 30 years to confront these problems. Why? Because men aren’t seen as victims, this makes it much harder for men to talk about abuse. I didn’t talk about my abuse, and in turn I became abusive because I wasn’t able to talk about my problems.

This compounds the problem. I became violent towards other men and an asshole to women in my previous relationships because that was the example that were set by both genders in my past. I wasn’t able to confront the issues that caused this behaviour until I understood the abuse that I faced at a young age.

Furthermore, the direct absence of understanding other forms of domestic abuse, besides violence, allows men to continue the cycle of abuse. Often unknowingly, as was my experience. I had no idea I was repeating the same mistakes in future relationships.  I was part of the gendered problem, not fully understanding domestic abuse. I ran the risk of continuing what was done to me onto future families as I marry and have children.

We need to include men in conversations around domestic abuse, particularly when it comes to being victims. We need to let men understand that it’s ok if they were a victim of domestic abuse and that they’re equally welcome at the podium when discussing it. We need to embrace a holistic approach before we can start addressing many of these issues, without it the same cyclical nature of abuse will continue.

The discussion around domestic violence has become a portrait into why we fail as a society to confront other forms of abuse. They’re not violent, however they’re abusive and extremely destructive.

You can injure someone with violence, you can destroy them with abuse.